Looking at Rio with a different pair of eyes

This is Carol reporting from Rio de Janeiro, Brazil, where I'm teaching a film subtitling course for translators. I've been here for two weeks, with over five yet to go.

I am inverting everything here. This blog is written in Portuguese and it's about our experience living in Canada, but now I'm writing in English about Rio. I'm thinking mostly about our new friends in Toronto, but at the same time I can't help feeling slightly gringa over here right now. I might as well play the part.

I was here around 1.5 year ago, but back then Toronto was still too new for us, and Rio was where we didn't have to think much about how things work. But now that we've been in Canada for almost 2.5 years, I can't help but to look at ordinary things with a different perspective. I feel pretty much an outsider in Rio. Knowing a city well doesn't necessarily mean that its lifestyle is in you. In our case, it's never really been, actually. We never fit in the carioca stereotype. In fact, I have no idea what kind of stereotype would suit me, because I feel a bit of an outsider everywhere.

First things first: nothing represents the identity of a culture as much as its food. Oh, okay, its language. Granted. As a linguist, I should have said this first. But food just tastes better. 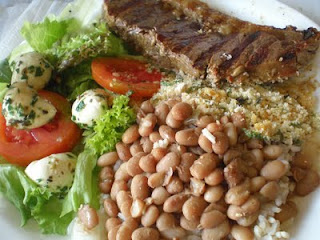 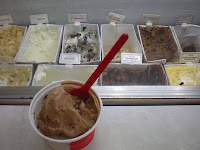 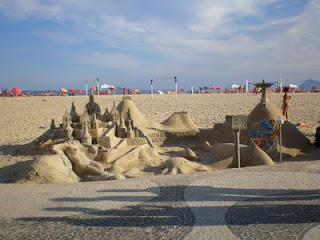 Just a couple of days later, I did what I never used to do while living in Rio: take a stroll along Copacabana beach on a sunny Sunday afternoon. On Sundays, the seashore avenue is closed and turned into a huge pedestrian lane. 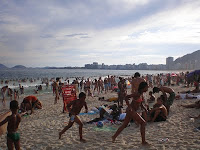 The beach is free, so it's a major entertainment option for most people. I actually went on the sand and all the way to the water - it's quite a walk. I was immediately reminded why I never go to the beach. Especially Copacabana on sunny Sunday afternoons.

As much as I try, I simply can't figure out what tourists find so fascinating about this. The exoticism? The amount of exposed skin? I guess I'm just not gringa enough yet. I just wanted to get out of there. 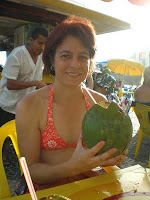 ...And straight into a coconut tent. Fresh cold coconut water, directly from a green coconut - cut open in front of your eyes with a huge knife - is one of the best things ever.


After those three first days, my experience as a tourist was over. I was more than happy to become just one more worker in the city. Not so happy about taking buses back and forth under over 35 degrees (Celsius, of course). Even less happy to deal with the insane rush-hour traffic and with lack of organization even in the very best working environments. And sad, but not surprised, about the huge amount of people - old beggars, pregnant girls, crack-addicted children - living and making a living on the streets, right at our (and everybody else's) doorsteps; about the constant urban noise, about the poor overall city maintenance, the pollution...

Okay, I'll stop. It's not intolerable. It's just messy. There are lots of good things too, of course.

Let me tell you about a place I really like.

We lived for many years in this neighborhood called Flamengo. Right now I'm staying in a building just over the seashore, in front of Flamengo Park. Check it out. (I didn't take this picture, of course. I'm not that tall.) 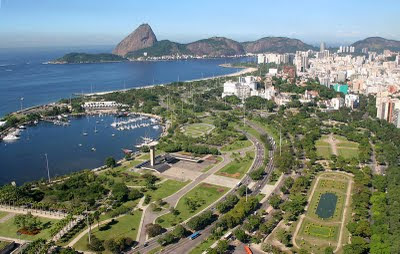 All of this didn't exist before the 1960's. The sea went all the way until close to where the buildings are. But, to expand the downtown area, some hills were flattened and became a huge landfill, which was turned into this park plus the smaller city airport. The landscaping was designed by Burle Marx. 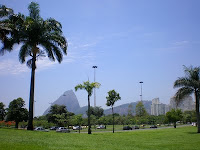 I can get there in just a few steps. I've been there three times to walk, run and exercise. Then I went back last Saturday morning with the camera, to document everything.

I really like this park. There's lots of space. The scenery changes suddenly as soon as you cross the pedestrian passages over or under eight highway lanes. 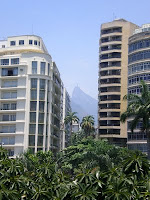 From over one of them I could spot the Corcovado mountain in between the buildings, with the Christ The Redeemer statue facing this part of town. 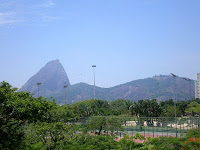 Still from over the passage, tennis courts and a creepy sight. The airplanes landing at the nearby airport are not that close to the Sugar Loaf - the perspective makes it seem that way - but this scene startles me all the time. 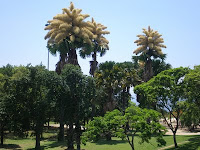 These particular palm trees are the talk of the town these days. It has taken them 50 years to bloom. They're at their blooming peak right now, and this will last for two years. After that, they will die. Since all of them were planted at the same time, they are all blooming, and they're all doomed. Not exactly the most efficient reproductive system, I would think.

Then, lots of leisure options unfold. 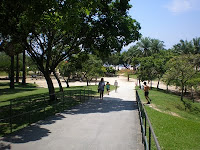 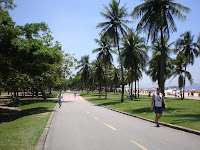 You can walk, run or bike along a large track. 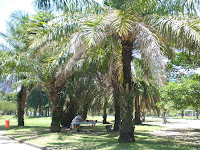 You can get a massage in the shade. Yes, that is a massage. Stranger things can be seen under the trees, especially after sunset, but let's not get into that. 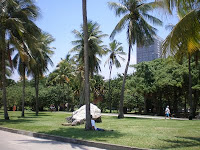 You can carelessly sit against a high palm tree loaded with 5-pound, rock-solid coconuts. Nothing to worry about. 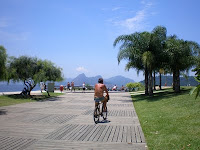 You can take a relaxing bike ride on the boardwalk. In time, you may even develop the ability to ride a bike wearing swim briefs. Combined with salty water and sand... okay, I'll stop here. 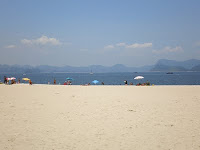 Then there is the beach. Not as impressive as Copacabana, but still alright if you like to roast.

Most people prefer to do sports, and not only the predictable ones. For instance, you can play something with a wooden racquet, a tennis ball and a badminton net (without the net, this would be called frescobol, but with the net I honestly have no idea).

Or you can play futvôlei, a combination of football and volleyball in which doubles teams play beach volleyball without touching the ball with their hands and arms. It's absolutely astonishing to watch, but they do it like it's something normal. 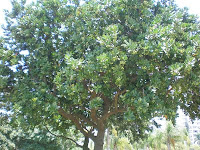 Nature is exuberant and there are all sorts of flowers and fruits. This is some kind of chestnut, I think. There are papayas, mangoes, coconuts... 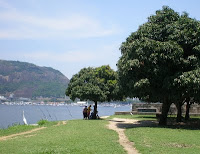 There is also the odd wildlife. But no, no pythons, gorillas or pumas.

Those two herons were waiting under mango trees for the fish to bite.

I was surprised to see the them so close to people, so I came closer to take a picture. Too close for this one, which took off when I approached. 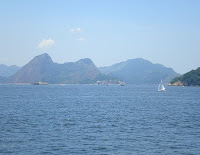 From the park you can see the narrow entrance to Guanabara Bay, inside of which Rio de Janeiro was founded, and the fortresses that were built to defend it in the early colonial days. Never really defended anything, but I still find them impressive. 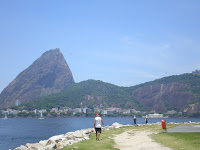 I found out that I really like the Sugar Loaf (nothing to do with loaf, much less with sugar - its name derives from a misunderstood tupi-guarani name). Rio's geography is unique and there are lots of sharp peaks, but this one rises from the ocean, 400 meters high. And really, getting to the top on a century-old cable car is just too cool. Or too crazy, one of both. 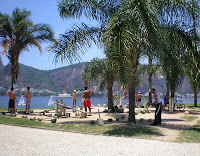 At the end of the park there is this open-air gym. There's always people exercising, but hardly any women. 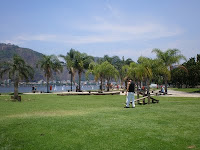 I prefer this green area for my exercises. There's more personal space and less eyes on you. 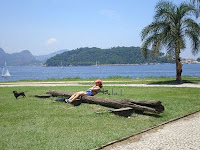 I'm not the only woman who thinks that way. 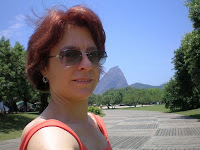 This is it for now. And this is me - as tropical as I can possibly be.
Marcadores: Brasil

Anônimo disse…
Great! One correction though... the cable cars are no longer century-old... The original ones have been replaced in the 70's and last year they replaced those with brand new and bigger ones!
23 de novembro de 2009 16:27

Carolina Alfaro de Carvalho disse…
Hi! Thanks for you comment! (I'm wondering who could you be...)

Yes, that's true. These are not the original cables and cars. I knew that, but I didn't make a point of explaining this for better dramatic effect ;-)